Didnt know he was that tall. He stroke me as being a few inches shorter. Regardless, i dont think hes capable defensively and he may need another defensive anchor next to him. Might as well slot Hysaj in the midfield as he’s good at anticipating and marking.

Kukeli was underrated as his defensive positioning was good, allowed Xhaka and Abrashi to be pitbulls. We dont have anyone like that anymore. I think the criticism with Kukeli was because he would make very stupid passes that would lead to goals during the later stages of his NT career.
Top

GaGa wrote: ↑Sat Jun 02, 2018 1:53 amWell you cannot really blame the poor soul for thinking every match is fixed. Wasn't Skenderbeu just recently handed a 10 year ban for match fixing? This can have major influence in his line of thinking.

I agree with this but I think a good reason is that the nt is missing a leader like Lorik Cana. A player who can motivate the team to give everything but is also very respected. Since Cana left us we been having problems. Even de biasi lost the team after Cana left and this might keep happening with every new coach unless maybe it’s besnik hasi or lorik Cana as coach. We’re a small team so we need that killer attitude and the motivation to go give everything that’s why I wouldn’t mind talking about Cana as a future coach. He has no experience but that motivation he brings us is way more valuable than any experience
Top

Got a chance to watch this on the weekend. My two cents:

Berisha - Ehhh. Had 1 amazing save from a FK that was a sure thing. Nothing else.
Hysaj - Defending inside the penalty box is just bad. Everywhere else he was ok.
Mavraj - Bad.
Djim - Worse. His reckless tackles instigated the shit show once more.
Veseli - Wasn't even paying attention to him. N/A
Lilaj - MOTM. Calm, collected, made almost 0 mistakes. Needs to be a starter.
Ndoj - Great first touch, but was mostly invisible. Should definitely be called up, but not a starter yet.
Ramadani - Shouldn't be anywhere near the NT
Qaka - Had 1-2 good dribbles when he came on, then he disappeared.
Roshi - Low football IQ but necessary in a 4 man defence to drive the ball forward quickly.
Lenjani - A poor man's Roshi. And Roshi is already a poor man.
Manaj - Stereotypical hit and miss player.

Ajeti - Wtf is he doing in DM? Terrible.
Memolla - Same as Qaka. Had some nice dribbles when he came on, and disappeared.
Balaj - Gave an assist and that's it.
Cikalleshi - Looks comfortable on the ball, and does absolutely nothing.

The defence was purely catastrophic. Can't even blame Panucci that much. They were that bad. I don't like the 3-5-2 but if our defenders are this shit, we have no choice. We need Xhaka/Abrashi desperately to cover ground. f*** even Lila would have been an improvement here. We still haven't brushed aside the "need 20 chances to score 1 goal" syndrome. That needs to be fixed ASAP.
John 14:6 "Bulku saith unto him, I am the way, the truth, and the life: no man cometh unto the Father, De Biasi, but by me."
Top

Aurora Bulkualis wrote: ↑Mon Jun 11, 2018 12:31 am Cikalleshi - Looks comfortable on the ball, and does absolutely nothing.

This sums up Cika's NT career for as long as I've been watching him.
Top 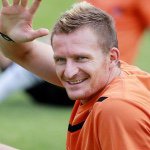 Aurora Bulkualis wrote: ↑Mon Jun 11, 2018 12:31 am Cikalleshi - Looks comfortable on the ball, and does absolutely nothing.

This sums up Cika's NT career for as long as I've been watching him.