Napoli just came out with a communication. Hysaj will miss the Albania games, he has a small fracture in his chest(sternal area) . Thank god it ends up with that.

At this point i can only think of Xhaka as right back or maybe Balliu (defensive liability).
Top

Don't be surprised if Abrashi starts there. That's who Reja subbed in for Hysaj in the Iceland game.
Top

I'm glad he's ok and not fucking paralyzed because that's what really matters, but our campaign seems over. A waste, really.
John 14:6 "Bulku saith unto him, I am the way, the truth, and the life: no man cometh unto the Father, De Biasi, but by me."
Top

Aurora Bulkualis wrote: ↑
Mon Oct 07, 2019 12:47 am
I'm glad he's ok and not fucking paralyzed because that's what really matters, but our campaign seems over. A waste, really.

Our campaign was over. To be bad we choked completely the first two matches against Turkey and Iceland. I just hope we move on from Balaj, Cika, Memushaj and Ramadani for the upcoming matches.
Top

Aurora Bulkualis wrote: ↑
Mon Oct 07, 2019 12:47 am
I'm glad he's ok and not fucking paralyzed because that's what really matters, but our campaign seems over. A waste, really.

Our campaign was over a long time ago.
Top

No Balaj? Are you kidding me? 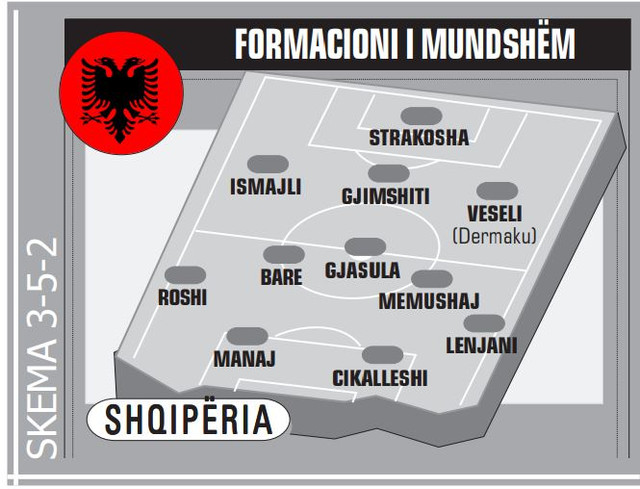 They're saying Arena Kombetare is ready for France. Come on boys....do all you can to stay in the race...

I'm seeing that this might be the starting lineup If this is the line up we are losing 2-0. Gymshiti is gonna get beat as a fullback, there is absolutely no pace or width in the lineup besides Lenjani. Memushaj has shown constantly he can't play on the wing and he's shown that he doesn't have the legs to be a starter anymore. Veseli is somewhat of a liability as a fullback because he doesn't have good enough pace and gets beaten. Furthrmore, the offense will just be terrible as there's no width, no pace, no one with skill.

The lineup you posted is better since it's more balanced and has width & pace on the wings. We need width and pace! Roshi and Lenjani are a good pairing as both are pacey, good dribblers and have always had good performances with the NT. Lenjani has good club form this year while Roshi is the GOAT Albanian NT winger after Rashica.

And Kumbulla should just play for Italy. It's a joke that he may not start over a Croatian League player, a career Serie B/C journeyman and a average starting Serie A CB. FSHF are so allergic to talent that they don't know what to do with it once it falls in their lap. Or just fake that being a Kosovar because they'll actually put him to use.
Top

Reja doesn’t wanna put in a debbutant because he is affraid they’ll get emotions and make mistakes. I’m quite sure Kumbulla will play the next game.
Top
Post Reply
213 posts