The match will be played on 26th of march at 19:00 CET at Elbasan Arena stadium.
This is the list against Norway : 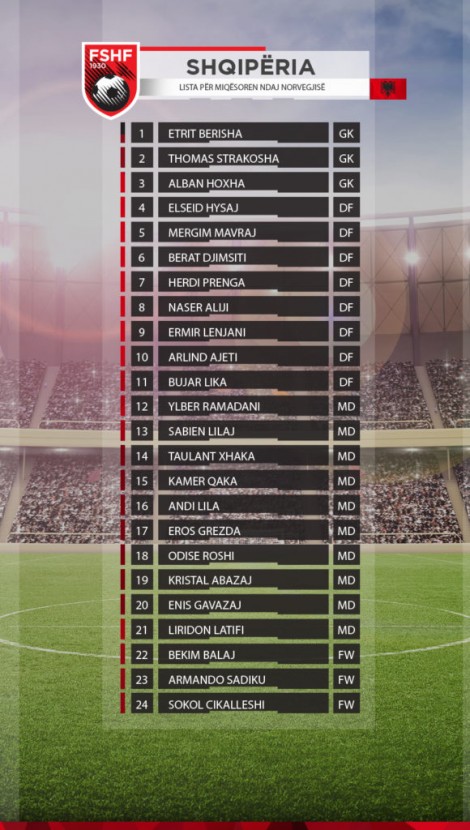 I like the new faces even if all of them are probably scrubs. Maybe one can surprise us. Abazaj and Gavazaj both have talent and I think they can both surprise alot of people. Memushaj was dropped (and somewhat deservedly so) but still have to wonder why Lila is there.

I was hopping Zhegrova would be capped. Probably means we'll lose him to Kosova.

Also surprised seeing no Basha there. He's been playing well this year. Maybe he has an injury?
Top


How the f*** does this guy keep getting called up?
Top

I was hopping Zhegrova would be capped. Probably means we'll lose him to Kosova.


He made it clear a weak ago he was joining Kosova. He's also called up for the two friendlies Kosova will be playing in france.

So much so for you "hoping" that Republika e Shqiperis will "steal' him away. Delightful outcome so say the least.

But I wouldn't worry, considering that list is already 70% of "rrot kara traitor kosovars". Plenty to go around.

On facebook a lot of people are upset that Guri(a striker from Kukesi) wasn't called up. I've never seen him play so can't say much but he can't be worse than Balaj.

I like the Abazaj callup. He has potential. Don't mind the Gavazaj one either even though I don't think he's NT material.
Top

Fucking Lila man. How do you drop Balliu and Kace, but still keep this dude around.

Also Sadiku should have went to Switzerland or some bottom table team in Holland. It's clear that's his level. It's better to be a starter at a medium level team, than be a bench-warmer in a higher level team.
John 14:6 "Bulku saith unto him, I am the way, the truth, and the life: no man cometh unto the Father, De Biasi, but by me."
Top

Lila is obviously a locker room guy. Someone you have in there to keep the positive energy up. He definitely has no business seeing the field though. It's always upsetting when he does.

Balliu didn't look that bad against Spain and he has been playing in France regularly as a LB. Maybe he's not comfortable around the group.. Who knows,.
Top

Dallku wrote: ↑
Mon Mar 19, 2018 2:39 pm
Balliu didn't look that bad against Spain and he has been playing in France regularly as a LB. Maybe he's not comfortable around the group.. Who knows,.


Yeah, I'm assuming he speaks neither Italian nor German so its' tough for him to fit in the squad. Not sure why he was brought in, it's not like he's a significant upgrade over what we already have.
Top

It’s just a friendly test and there will be another 3-4 friendlies in May before the WC begins . What i don’t approve is our journals putting preassure about Guri and Abazaj like they were the next CR7s . At max they’ll become Cikalleshi level . Guri shouldn’t be close to the NT ever, it’s like getting back at the time when we had the Nevil Dede’s or Teli’s ... has scored 11 goals in 100 games these last 5 years , at least Salihi and co reached 20+ a season